There is a rumor going around that the '70s are actually the '50s. There is a Republican in the White House, and Elvis Presley is on the stage. The girls in pedal pushers and curlers who once listened to Elvis warble "Hound Dog" and moan "Don't Be Cruel" are now pushing 40. The ducktailed boys of the '50s no longer have grease on their hair - if they have hair at all.

Yet, there he was Sunday in Scope. Elvis Presley, complete with coal black (dyed) hair and bigger than ever (noticeably in weight). The tickets had sold out so quickly for the evening show that an afternoon event was added.

The coliseum holds 11,300 people for an event of this type and every seat was sold. Scalpers were pushing stray tickets at advanced prices (even through classified ads). Before the day was over, 22,000 people would see Elvis, and his take would be well over $200,000 - a bit to add to his estimated $5-million annual income. 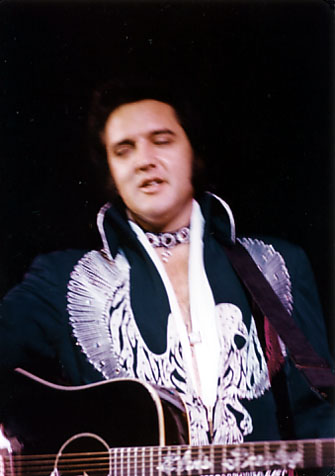 Elvis' afternoon show went smoothly - professionally - as expected. But the evening concert-goers witnessed a split between the performer and three female members of this musical entourage. Midway through the hour show, two members of the black backup group, the Sweet Inspirations, and another backup singer a white, walked off the stage and never returned. The incident followed some joking and not-so-joking comments that Elvis directed their way.

At the outset, Elvis was commenting on 12,000 people breathing on him. He mentioned an aroma of "green peppers and onions" and then said the Sweet Inspirations had probably been eating catfish. Two of the three black singers didn't laugh with Elvis and the audience. Later, Elvis broke from his singing to tell the women to pay attention to the show. It wasn't clear what prompted the remark.

He told the backup singers that the show may be old hat to them but that it was the first time the audience had seen it. Minutes later, while Elvis was introducing members of his stage show, he looked toward the women and quipped, "Sorry for any embarrassment I might have caused you, but if you can't take it, get off the pot."

One member of the Sweet Inspirations turned and left her spot at the right of the stage. The two other women followed seconds later, in what appeared to be an effort to bring back the first woman. But none of the three reappeared. One Sweet Inspiration remained and sang and clapped and smiled through the remainder of the performance. 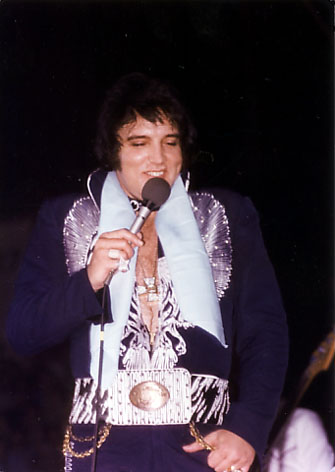 Elvis obviously appreciated her staying. He walked over to her at one point, took what appeared to be a diamond ring from his finger, and held it out to her. "Take it, take it," he said. She took it. Elvis only casually mentioned the walkout, and the incident didn't detract from his performance..

He was kidding a guitarist and gave him a playful nudge with his leg. "Now, Charlie, don't you get upset with me and leave the stage," Elvis said, "I was only kidding."

He arrived in the dark of early morning Sunday. The private jet touched ground at Piedmont Aviation, adjacent to the Norfolk airport, between I and 2 a.m. A second plane followed within moments, carrying the band and the crew. Even with the lateness of the hour, about 20 people had gathered outside the fence, clutching the wire and peering through like concentration camp prisoners. The reports are that if they caught a glimpse of the superstar, it was a brief one. He was whisked away to a hotel.

At Scope, the crowd began to gather at 1:00 p.m. and by the 2:30 showtime, practically every seat was filled. The crowd was polite (extremely so) to a group called the Voice, a comedian named Jackie something-or-other (who was about as predictable as tomorrow's sunrise) and the Sweet Inspirations. The groups had the unenviable task of filling finne up until intermission.

Finally, at 3:40, the band (an excellent ensemble and, in fact, one of the best heard on the road), broke into the pompous strains of " Thus Spake Zarathustra ". In the movie "2001": A Space Odyssey", it was used to herald the dawn of creation. Here, it was Elvis' entrance music.

The tension among the fans was noticeable. Reports on Elvis' health have been rampant in the past year. Stories that he would never work again because of excessive weight-gain have also been printed.

The fan clubs, who had successfully snared downfront seats, were generous with gifts. As he sang "Teddy Bear", one woman came forward with a stuffed bear gift, knowing his fondness for collecting stuffed animals. Another came forward with a handmade quilt. Another with a rose. Another with a bottle of Cold Duck. Most were rewarded with a scarf, dampened dutifully with his own sweat.

Charlie Hodge from Alabama subserviently followed Elvis about, adding a new scarf around his neck each time he passed one to a fan. For those who couldn't get a sweaty one, others were on sale in the lobby - in a choice of "Old Southern Mansion White" or "Baby Blue".

A second show was set for Sunday night.

One may well wonder how many hundreds of additional shows there will be for the King of the Golden Oldies. If Sunday's flurry and cash outlay are any indication, he may well be singing "Hound Dog" when he's 50.

After all, that's only 10 years from now. A thunder of squeals and whistles permeated the hall as he entered, surrounded by men in white suits who are his bodyguards and are sometimes known as the "Memphis Mafia". He was clad in a Navy blue jumpsuit, trimmed in silver, with bell-bottoms and the front cut to near the navel. He laughed and jumped back, as if surprised that there was anyone there. He strolled back and forth on the stage, accepting the plaudits of the crowd as if he were a Roman emperor.

It was the fifth time Elvis performed in Tidewater and the first in Norfolk since the mid-50ĺs, when he appeared in the bottom half of a bill in the Arena.

He wears a large silver belt, similar to the trophies of wrestlers, which serves, somewhat effectively, to hid a pot tummy that was not with him on his last visit here. He has a puffy and pasty-faced look that is also new.

But if Elvis hit 40 last Jan. 8, he knows it. In spite of his heavy emphasis on nostalgia, his act has just enough humor to convince his fans that he knows heĺs not still 19.  After all, he has been a figure of fantasy for years, and he, apparently knows how to laugh at the whole thing. He will strike a pose and then laugh at himself. He will shake the one leg and wiggle the middle to prove that he still can handle the nickname of The Pelvis. Then, he waits for the audience reaction ľ and laughs.

He maintains a certain ironic distance from his own image ľ a bit of self-parody that contrasts with his narcissism of the 50ĺs. 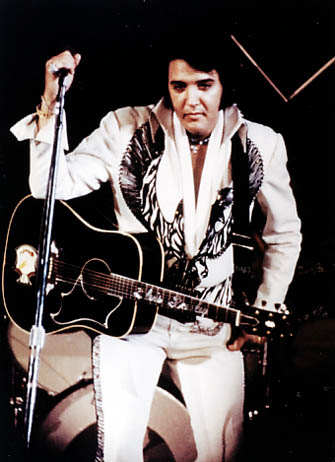 He broke into ô C. C. Rider ô and, upon finishing, asked Ester, a member of the Sweet Inspirations, what time it was. Learning that it was 3:30 in the afternoon, he replied that it was nightime to him. ô I just woke up ô, he said. ô In my life, night is day. ô He broke into ô I Got A Woman ô, ô Amen ô, ô Big Boss Man ô, ôLove Me ô, ô All Shook Up ô, ô I Canĺt Help Falling In Love ô and really let loose with the hymn ô How Great Thou Art ô.

The emphasis was more on nostalgia than past shows, as the granddaddy of rock Ĺnĺ roll called upon his credentials. Elvis, above all else,  is the very definition of rock Ĺnĺ roll, to its vociferous defenders as well as detractors. If he sings like yesteryear, however , his attire makes look like Mr. Tomorrow.

The words ô You Ainĺt ô drew an ovation, as he paused before adding ô nothing but a hound dog ô.

One woman who kept screaming ô Elvis ô in rapturous tones was quieted, sighing, by his comment ô Honey, just calm down until we get through with the show, and then weĺll get on with whatever you want to do. ô

During intermission a man who looked much like the villain in Disneyĺs ô Pinnochio ô, announced from the stage that Elvis posters were going for $2., photo albums for $3., and scarves for $5. Someone revealed that the present huckster is actually one of the first disc jockeys who ever played an Elvis record. Presley has employed him during the years since.

ô Itĺs a hard way to make a living, fellows ô, Elvis said as he kissed yet another woman. His kissing score for the afternoon show must have been about 20 ľ unsanitary perhaps, but highly profitable. ô Bring the child down here ô, he said in supremely Biblical tones, as one woman held up her small daughter. He hugged the girl as his band went, ô Ahhhhhhh ô in mocking tones. He later reprimanded them, good-naturedly. 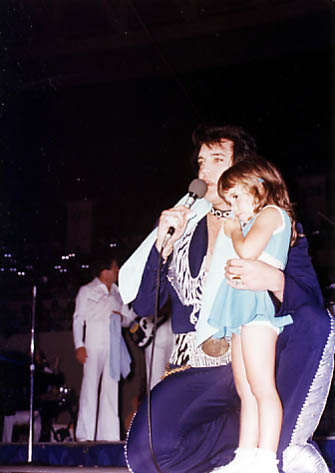 ô This place looks like a space ship ô, Presley said as he looked out across Scope.When the lights flashed, later, he interrupted a song to add, ô I told you we were in a space ship. Weĺre taking off ô.

After a standing ovation, which would surely have been granted even if he had sung Gregorian Chants, he rushed from the stage, surrounded by the Memphis Mafia with interference run by the Norfolk Police Department. The character from ô Pinnochio ôshouted ô Fans, fans. Elvis has left the building ô, just to let them know that there was no use in storming the backstage in an effort to get autographs.