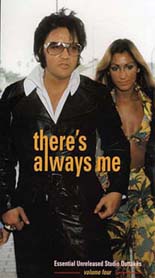 This is the first volume of the series I bought, because of the That's the Way It Is-rehearsals. At the time I was completely going for the live-CD's and with a wife and two little kids you have to choose now and then. But after hearing this CD I decided to take an extra mortgage on my house and to dive into the studio-CD's again. This must be saying enough, so I think more review isn't necessary.

Okay, okay, since I have time enough... and an extra reason to listen to the CD once again I will continue a little more. Let's start with Disc 2, 'cause that one was the reason to buy the set anyway. The first real song, Something, which is in any of Elvis' version a precious diamond, is very beautiful. Easily sung as always, with an extra solo rehearsal of the chorus at the end. Words, also beautiful as always, taught me it is possible to steal somebody's ass away. More familiar from the movie is I Just Can't Help Believin' (somebody ate the words). I won't say anything about this version because probably everyone knows it and it's my favorite song, so I can't be neutral. To me Little Sister/ Get Back is a real highlight on the set. It's more than 5 and halve minutes and I wouldn't mind if it was twice as long. Next we get a few songs known from 'The Lost Performances': 'I Washed My Hands in Muddy Water', 'I Was the One', 'Cattle Call', 'Baby Let's Play House' (superb music!), 'Don't' and 'Money Honey' all show the well known relaxed Elvis, fooling around and in the meanwhile making some great music. Not listed follows a small part of 'Hard Headed Woman'. In 'A Fool Such As I' Elvis really honors the title. Fooling around from very low to very high, punishing his guitar Elvis does this oldie in the way only he could. 'Froggy Went A Courtin'' is complete on this CD, but I can't say it really gives more than on BMG's 70's box-set 'Walk a Mile in My Shoes', except for his catching laugh at the end. After this laughing intermezzo we get respectively a very powerful version of 'Such a Night' and a very serious 'It's Now or Never'. At least... he starts seriously but before finishing the first verse he starts changing words again.... and closes the song with one line of 'Are You Horny Tonight?'. The other highlight of this CD is at the moment available on BMG too. The 'Platinum'-set has it in a slightly better quality, but this version of 'What'd I Say' is so great that even over a telephone-line it would sound good. The CD is closed by 'The Lord's Prayer', which isn't my favorite, but it only takes 28 seconds.

Disc 1 starts with two takes of 'Mine' (3/4). The first one is so beautiful I almost got angry at Elvis because he breaks it up. 'Fame and Fortune' is from the first take on a great song, as proved on this CD. It's so good I wonder why they did more takes back then.... Think it's more powerful than the released version, but from a commercial view it may be too much. Next up are 4 takes of 'His Latest Flame', more than 4 minutes Elvis in a great shape, making the song perfect. Three more takes of 'Fame and Fortune' fill another 5 minutes on the CD, getting closer to the original release. 'Just for Old Time Sake' and 'Night Rider' are both well done, but belong not to my favorites, although I have to admit 'Old Time Sake' is a beautiful song. My favorite on this part of the set is next, Bob Dylan's 'Tomorrow Is a Long Time' can't be long enough and after this 6 minutes I still want more. 'Beyond the Reef' is one of those songs of which I can understand it wasn't released back in the 60's. It just isn't my song. The next one is.... as you may expect when you know the title of one of my pages. 'Down in the Alley' has always been one of my favorite songs. At the and of take 3 Elvis is totally breaking up laughing and still not recovered in take 4, but in take 6 he makes it to the end. 'Love Letters' is one of those other songs that's much too short. It doesn't matter to me if I hear the 60's or 70's version, I even love Allison Moyet's version. Next on is 'Big Boss Man', in my opinion this is really the session leading to the return of the King. Another beautiful version of 'Mine' is followed by take 7 of 'U.S. Male', one of those 'real' Elvis-songs. A short jam leads into 5 takes of 'Stay Away', all up-tempo. For the slow version you'll need '24 Carat Gold', which was meant to be 'There's Always Me, Volume 5'. The last track Elvis is singing on shows the rockin' takes 6, 9 and 10 of 'U.S. Male' ('ahh, shit' according to Elvis). The Disc is closed by a karaoke version of 'Mine', beautiful, but I miss something.

Following Willem's star-system the first disc of the set is certainly *****, the final ****1/2 is caused by the second disc.