(Blast from the past - Strictly Elvis October 1969) 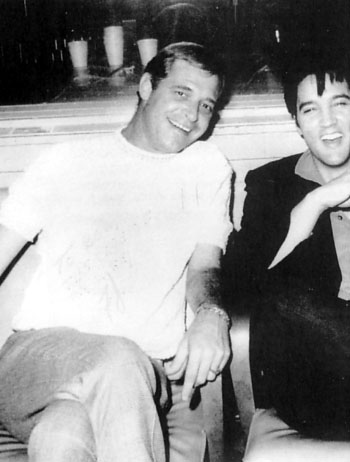 The following is an extremely interesting interview with Felton Jarvis ( Elvis' producer ) that was in an issue of Hit Parader magazine. I am printing a condensed version of article as it says much about Elvis' recording plans, and how his attitude towards recording has changed in recent months. I met Mr. Jarvis in Nashville. He is an unbelievable knowledgeable person, a close friend of Elvis, one of the top producers in the world, and a great guy. The following is a condensed version of the interview.

HP: How old are you?

HP: You went through the rock n' roll thing then.

Felton: Yeah I came up with Elvis. We're almost the same age. His birthday is in January, mine's in November.

HP: You didn't know him as a child or anything, did you?

Felton: I first met Elvis when he started with Sun Records. He's the one that influenced me into the music business. When I met him and saw him perform, I was so moved by it I wanted to get into the business.

HP: You probably wanted to be a performer at the time.

Felton: Yeah, I did and I was a performer. I recorded for a while. Probably the worst you've ever heard.

HP: Did you sing in Church?

Felton: Oh yeah. I sang in a Methodist church.

HP: The type of church music you sang as a kid, would that have been different than one of the popular white gospel groups now?

Felton: No it's very similar. Like the Blackwood Brothers or the Statesmen Quartet. I used to go to those all night things, so did Elvis. They call it night singing. They have them all throughout the south. They have about 15 to 20 quartets and they just sing. It's really something.

HP: Maybe because you're a southerner that kind of music sounds soulful to you, but it doesn't strike me that way at all. It sounds very corny to me like barbershop harmony.

Felton: Some of it rocks pretty good. Some of it is like barbershop. If you ever saw the Statesmen perform, they really get with it. They're really very exciting. Jake Hedge has been a big influence on Elvis. I also recorded Jake Hedge, who used to be the lead singer for the Statesmen. He's the biggest influence on Elvis there ever was. If you knew Jake's voice and you hear Elvis sing, you can hear inflections of things that he's gotten from Jake.

HP: Who were some of the people you were listening to as a kid?

Felton: Country music was the big thing. I grew up on that mainly. When Elvis Presley came along I went to see him on a country show with Hank Snow. I was in the marine corps in Norfolk, Virginia when I met Elvis. I was a big hillbilly fan and I listened to WCMS up there all the time. Sheriff Tex Davis was the D. J. there. He now works for Monument Records. They had a big Grand Ole Opry Show starring Hank Snow, Onie Wheeler and Elvis Presley and the Blue Moon Boys. When I went to the show, I had never heard of Elvis Presley and the Blue Moon Boys, That was just Scotty Moore and Bill Black. That was before he had D. J. Fontana, the drummer.

HP: How long was he on that show?

Felton: That was just a one night thing. You've heard of these one night Grand Ole Opry shows across the country. Elvis was on that tour. I think it was about a 20 or 30 day tour all together. When I met him and talked to him I said this is it. So I started following him and became a fan of his.

HP: Had he already had a Sun Record then?

HP: Can you recall how the audience reacted to him?

Felton: Oh, he tore them up. He just stopped the show. It was unbelievable. He sang " That's All Right Mama, " too, and they dug it. I had never seen anything like it. Really tore my head up. I was about 18 years old at the time. It was so exciting. It was completely different from anything else at the time, the way he moved on stage and everything. It was just wild. People were screaming and nobody knew who he was when they went to the show. So it wasn't any big image that was built up, it was just what they saw that destroyed them.

HP: How did you get with Elvis?

Felton: When Elvis came in to record, Chet told me " I'd like you to go over and work with him. " So I did and we just hit it off together. We liked the same things, heard things the same way, We've become very close friends since then. I go to his home, spend the week with him and go to Palm Springs with him. I started working with him in 1965 or 1966. 1 love him like a brother.

HP: What went on in Memphis?

Felton: Oh, we cut some good things. We used American Studios. Elvis and I are both very excited about it We have the most sides cut on him that RCA's had in years. We did some of the things with the old sound. We did some things with a very modern sound. We used all Memphis musicians.

Felton: Oh he's the greatest in the world. He's so good and so talented that it's just a joy to work with someone like that. He's so down to earth and real and sincere about anything and everything.

HP: How does he communicate with the musicians?

Felton: He just talks to them. He'll say " Hey man, could you put one little bass run in this break down here " or whatever. He talks the kind of language they understand. They don't sit down and read or have a bunch of charts in front of them. Elvis doesn't like that. He likes the relaxed atmosphere and the informal feeling and let's try a lot of different things. Elvis is really getting excited about recording again. I think for a while there he was so busy making movies that he kinda lost interest. Now, he wants to hear every little thing that I change or do. He's interested. He used to say well put it down, that's okay. He plays guitar and he plays bass and piano. He's a pretty talented guy.

HP: Does he do that on the sessions now?

Felton: Oh yeah he plays guitar and he plays piano quite a bit on sessions.

HP: Who seems to be his favorite musicians? Does he ask for particular guys all the time?

Felton: No, he just likes anybody that's young and has different ideas and will come up with creative things, He doesn't care who they are really. He likes the guys in Memphis and he likes the guys in Nashville. They're all great. The reason he cut in Memphis this time' is he just wanted to try something different. He's been doing the same old thing for a long time. He just decided he would use a different approach to something. Use all new guys, new studio and try to see what he could come up with. Try to prove himself. Even though he's still the king, he's still hunting and striving for something different. I appreciate that. A lot of guys get where they don't care. But Elvis isn't like that. His first love is making records and singing. He told me, " Man, you know when I sing something that makes me feel good or put cold chills on me or makes me feel good inside, money can't buy that. It really makes me feel good to feel that way. When I sing something that I'm proud of, I walk away and say that's good. It makes me feel good, " This is his first love.

Mr. Jarvis was on hand in Las Vegas to tape Elvis for the upcoming " live " releases. You will soon be able to hear Felton's artistry in action ( and Elvis' ).