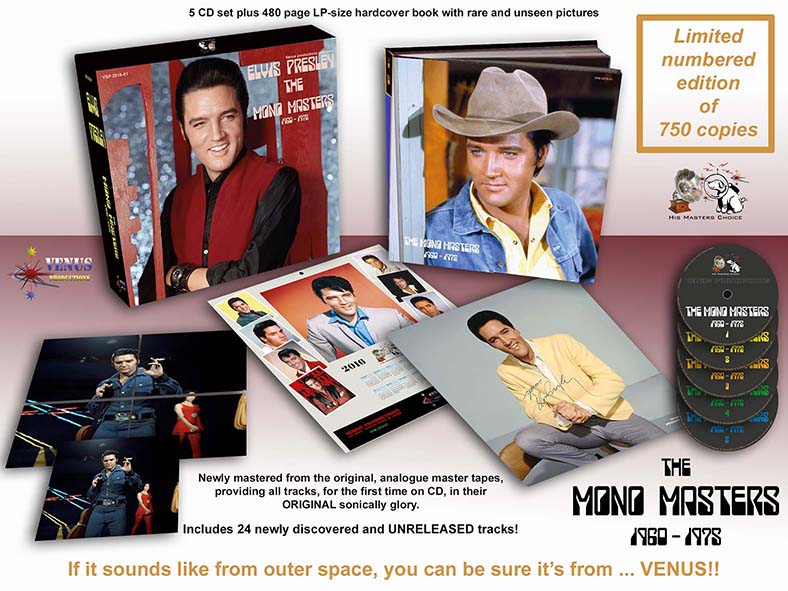 With the advent of the compact disc (CD) in the early 1980s, music lovers and Elvis fans alike, thought that vinyl phonograph records such as Long Playing (LP) "albums" and the (45rpm) "single" analog platters were finally extinct and would become obsolete along with the player component known as the turntable in favor of the new digital  format. The CD technology boasted a much "cleaner" sound for increased clarity and detail. Gone were the annoying, "scratchy" sounds produced by a "needle" that scraped the surface of worn wax caused by repeated play and the manual handling of a delicate tone arm. Listeners could now enjoy the reproduction of a wider dynamic range, convenient song (track) selection with the capability to backtrack, skip track, direct track, fast forward, rewind and even shuffle play all at the touch of a button on the included remote control! The "indestructible" compact disc was here to stay and would become the preferred format for recorded music.

Fast forward (pardon the pun) if you will, to present day when the vinyl LP and single are enjoying a most unpredictable resurgence! There are many who contest that vinyl sounds better than CD and vice versa.  The vinylists suggest a "warmer" sound as opposed to the "harsh" sound of CD, while the digital advocate stresses the unprecedented clarity and wide dynamic range of compact disc. I, personally, have included myself in the latter category, until now that is! Well, sort of.

By 1960, the two-channel process of recording came to be known as Stereo and beginning with Elvis' first LP of the decade, his beloved RCA record label coined the Living Stereo trademark.  Hence, most, if not all, subsequent LPs were issued in both monophonic (mono) and stereophonic (two-channel or "Stereo") sound. The singles, however, were largely issued in mono for radio air play as "stereo-ready" radios were virtually non-existent.

The success story of Elvis' 1950s (mono) recording career need not be detailed here, but perhaps a reminder of the recorded works of his 1960s and '70s output does. Particularly, the mono singles that span the years 1960 - 1975 that  are collected here for the first time in one package on CD. "Joshua Fit The Battle" / "Known Only To Him", "Milky White Way" / "Swing Down Sweet Chariot" and "His Hand In Mine" / "How Great Thou Art" are omitted. (One would assume that is due to the unavailability of the session tape or original acetate). This imported 5-disc boxed set is a splendid presentation of stellar professionalism and guaranteed to provide Something Special For Everybody!  Whether the sound of vinyl or CD is favored, the thirst for a fresh Elvis sound is quenched: These mono recordings were mixed specifically for vinyl respective of the time of release! What we have here is the U.S. mono singles collection, mixed for the vinyl singles of the day from original session tapes on CD!  All the "warmth" of vinyl came to light for these ears as well as the recall of what my old 45s sounded like way back when minus the snap, crackle, pop! Whoever said you can't have your cake and eat it, too, was dead wrong. Much like the vinyl skeptic that I was, I was never inordinately enthusiastic with respect to the sound of acetates. Too much like worn out vinyl was my thinking. A small portion of Disc 4 and all of Disc 5 is comprised of mono acetates. The original session tapes were again inaccessible to the producers, I presume. Needless to say, I am no longer an acetate skeptic! These are the cleanest I've heard and I've heard 'em all. I opine that they're culled from "original acetates".

Each of the five discs has a unique cover design and is actually a puzzle that, when joined together, comprise the cover photo of disc one! This is a charming idea, as is the inclusion of a bonus photo / calendar that was a common practice back in the day. The back covers list the song titles. An eleven-inch square and three-inch thick box that is beautifully laminated houses the discs in a cut-out in the box's false bottom. Much of the space is occupied by an included 480-page, eleven-inch square behemoth of a hard cover book. The front and back covers of all the U.S. singles are vibrantly reproduced in chronological order, as are the covers from other select countries. Songwriters, recording, and original artist information (when necessary), master serial numbers, release dates, first LP appearances, and complete song lyrics are all provided as part of the concise text. Extravagantly printed publicity and candid photos are sandwiched between each corresponding record release allowing for a pleasant flow as the story unfolds (the decision to include the wildly sexy shot of Ann-Margret on page 129 is a very nice touch indeed)! The vibrancy of the photographic reproduction throughout raises the bar and sets a new standard!

The 32-song track listing of Disc One reads like a virtual greatest hits package with nary a commercial failure throughout. Spanning the times of March 1960 through July 1964, we are treated to five number ones and seven top tens with the remaining cuts ALL making the Top 40! Quite a feat when considering the market flood of sixteen singles and fourteen long-playing albums in four years!

Disc Two has a 32-song track listing as well and spans July 1964 - September 1967. By this time the British invasion was well under way and although Elvis was doing way too many movies, he still manages a Top 10 single in 1965 and most every single release makes it well into the Top 40!

Covering October 1967 through November 1969, Disc 3 offers 23 songs. While Elvis' ambition to make great records is rekindled with the recording sessions that were held in January of '68 and September of the preceding year, which produced the likes of "Guitar Man", "Big Boss Man", "You Don't Know Me", "Hi-Heeled Sneakers" and "U.S. Male", record sales were unreflective.  Determined, Elvis unleashes one of the supreme performances of his career when recording "If I Can Dream" for the TV special in 1968, which peaks as a single at #12 in Billboard magazine. Hit singles no longer elude Elvis as Disc 3 concludes with more top tens and a number one! All of which were recorded during the renowned 1969 sessions in Memphis.

As "Kentucky Rain" was released in 1970, suffice it to say that the 22 tracks on Disc 4 and the 20 tracks on Disc 5 cover the singles output of the decade up to and including 1975. The three singles of '76 and '77 were not recorded in mono and, therefore, omitted.  As is the formula, original session tapes make up most of Disc 4; then, original acetate sources begin with track 19 and "Merry Christmas Baby".  Upon listening to Disc 4, one might understand just how reliant on Elvis' name alone the record company was to insure substantial record sales.  Sadly, good, solid promotion was grossly lacking. Any number of the singles released in this period might have tripled in sales with proper advertisement. "Rags to Riches", "I'm Leavin'", "It's Only Love" and "Until It's Time For You To Go" (heard here from original acetate) are all fine examples of the above statement.

The final disc is solely made up of original acetates and some of the most interesting mixes can be heard here. As previously stated, the absence of the usual "dusty" sound of this source makes for a most enjoyable listening experience, and '70s skeptics might reevaluate their thinking with respect to the quality of songs Elvis chose to record in this period. For during what turns out to be Elvis' swansong years, the likes of "American Trilogy", "First Time Ever I Saw Your Face", "Burning Love" ( another top ten), "Always On My Mind", "For Ol' Times Sake" and "Promised Land" were all stimulating singles for the Elvis fan of the day and, dare I say, stand the test of time! Again, it was then as it is now, my contention that, had more attention been paid to proper promotion and radio airplay, the sales of these singles could and would have tripled. Thankfully, we still have the music to savor despite the then-disappointment in the sales department.

I have been listening to nothing but these five discs since I received this historical package and propose that hearing these exact replicas of the original singles' mixes back-to-back again in this manner, brings back a heap of good memories. One can almost "see" a platter spinning on the turntable in the mind's eye. Elvis' own preference for mono is understood as vocal nuances seem more evident and the music "punchier", rendering a soulful and funkier sound to "If You Talk In Your Sleep" and "Raised On Rock" respectively. For those who may not recall the unique sound of '60s and '70s vinyl, expect to experience the win-win state of affairs sealed within this very handsome package. Another personal point of irony is that, though appropriate, the set coincidentally concludes with the semi-autobiographical "Pieces Of My Life".

As used to controlling bass, treble, and equalization as I am, I have not found it necessary with much of this set, and, though tempted, I refrain from pointing out any personal sonic highlights (other than the aforementioned) in favor of allowing the individual listener's subjective opinions to shine through!

Make no mistake. This heavy duty collectable (and I DO mean HEAVY), is already highly sought-after and MUST occupy a place on your shelf! Perhaps as a companion piece going hand-and-hand alongside the newly-released "Album Collection", or as we say in Italian, Mono e Mono. Happy collecting!