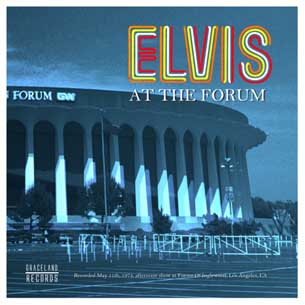 Elvis At The Forum

This CD has recently been issued by Graceland Records and contains the afternoon show performed at the Forum Of Inglewood in Los Angeles on May 11th 1974. Although this show was previously released by the Tiger label in 1993, it was both incomplete and wrongly dated. This re-issue contains the complete show, which now includes the performance of Polk Salad Annie which was missing on the earlier release and has been re-mastered from the original tape to provide superior sound quality.

It comes with a generous 20 page booklet, featuring an amazing thirty five colour photos of Elvis in the Peacock suit which was worn during this afternoon show. Along with an overview of this period, it includes an interesting essay by Robert Hilburn who concludes that the indifference of some of the past shows was absent and that he seemed to enjoy performing again. Further photos and details are provided about the venue with additional photos featured on the artwork, inlay tray and the disc itself. In short the design and layout of this production are simply superb.

The sound quality is both clearer and has more depth than the previous release, resulting in a fuller sound and the hiss which was apparent before has been completely eliminated. In addition, the tape speed has been corrected so that the songs now run at the correct speed, whereas before they were slightly fast. Whilst the sound is good overall, some of the dialogue is still difficult to make out, but the crowd atmosphere comes over well which compensates for this and makes it enjoyable to listen to.

The recording starts with the 2001 introduction, although disappointingly the first 30 seconds are badly distorted, indicating tape damage which was not apparent on the earlier release. However after this the sound improves dramatically and remains consistent for the rest of the show.

The opening See See Rider is followed by I Got A Woman which includes a vocal slide from J. D. Sumner, causing Elvis to remark, “He’s lower than a whale’s belly folks.” Afterwards he seems to have mistimed his karate moves, as he asks his band if they would repeat the ending, resulting in a protracted series of drumbeats and further applause.

Love Me is followed by Trying To Get To You, leading on to the ‘50’s hits, which are all well received but prove to be the usual standard fare. The great crowd atmosphere provides added interest to Love Me Tender, before an unusual inclusion—a one off version of You Can Have Her.

This song was high in the charts at this time and Elvis obviously liked it as it was rehearsed on several occasions for inclusion in his shows; however this was the ONLY known time it made it into the set-list. It proves to be a committed full length version going through several key changes before reaching its eventual climax and surprisingly is performed without any kind of introduction or comment afterwards.

After this he goes straight into Steamroller Blues, which proves to be a great version where he can be heard calling out enthusiastically both before and during the guitar break. A rushed Hound Dog follows this, which he introduces as “My message song for the afternoon,” and features some great funky blues guitar licks from James Burton. At the end of this song he spontaneously ad-libs the line, ‘You ain’t nothing but a Hound Dog but that’s alright.’

Fever is greeted with the usual excited screams which continue unabated throughout, followed by Polk Salad Annie which was missing from the previous release of this show. Although the performance is good, Duke Bardwell’s bass solo is noticeably lacking in both fire and inspiration and there are several seconds of tape damage spoiling the end of this song.

After he has recovered from his exertions, he calls on J. D. Sumner and the Stamps to sing Why Me Lord. This was a new song introduced earlier in the year and is sung here with reverence and without the jokes at J. D’s expense which would detract from performances in later years. Suspicious Minds is performed next, followed by the group introductions where he introduces his new backing singers called Voice, who joined his band earlier this year.

He then asks, “Remember what I can’t do?” which serves as the cue for I Can’t Stop Loving You, which also features the regular ad-lib ‘the one I dread’ before the demanding vocal reach on the ending. After this Help Me is introduced as his latest single, followed by American Trilogy where a fan shouts out ‘God bless you’ just as he starts singing.

Let Me Be There is performed next with the standard reprise, after which Elvis calls for the lights to be turned up which results in frenzied screams, prompting him to remark, “It’s like when we played the Astrodome.” Funny How Time Slips Away follows this, providing a signal to the audience that the end of the show was drawing near.

Afterwards Big Boss Man is performed as a new song for this tour. This turns out to be a shortened version with a different rhythmic pattern at the start and includes a terrific guitar solo from James Burton. As one of the first ever live versions it sounds slightly tentative but proves interesting nonetheless.

This is followed by a short closing address before Can’t Help Falling In Love, which ends with an impressive vocal reach on the ending. The recording goes on to capture animated conversation between fans after the performance, whose enthusiastic verdict (‘He was great’) provides a fitting end to this CD.

In conclusion, this is a quality upgrade of a show containing a unique performance of a rare song—You Can Have Her. The sound quality of this song is an improvement over the ‘official’ version contained in the FTD title: Live In L.A, which by contrast is hissy and not as sharp as featured here. As such, this production represents the definitive source for this rarity, which together with extremely attractive presentation makes this an essential release for all serious collectors.