German article about Bill Haley including usual rant against Elvis

You can add here the info of Elvis in the media

Re: German article about Bill Haley including usual rant against Elvis

For those that care, here's the translation of the whole article:

Larded and checked jacket made Bill Haley a portrait of a cultural revolution in 1955: his song "Rock Around The Clock" became the hymn of a generation that broke with the bourgeois values ​​of their parents.

By Philip Cassier
Head of Text ICON / Welt am Sonntag

With his shiny complexion and chubby cheeks, the man exuded the revolutionary karma of a canteen chef even in his checked jacket on stage. Dancing couples turned in circles to his music, he in a tuxedo, she in a little dress. And the choreography of his comets initially consisted mainly of moving the head left and right: No, anyone who looks at Bill Haley's (1925–1981) work today can no longer imagine how he would be the starting point of the greatest The cultural eruption of the second half of the 20th century was rock 'n' roll with its dream of a life beyond bourgeois norms.

It can only be said that on March 19, 1955, the world was in a completely different state than it is today. On that day, the film "Saat der Macht" ("Blackboard Jungle") was released in cinemas in the USA - a film that dealt with the not exactly gallant behavior of schoolchildren in New York's Bronx. Haley did nothing more than deliver the title track with “Rock Around The Clock”, but the genie was out of the bottle: Teens bought the single millions of times, parents desperate over their children - or beat them up - and even Frank Sinatra watched his hits and connections to the mob for a while like a man from the bronze age of entertainment.

It would be pointless to try to get into the phenomenon musically. The 4/4 beat of the drums and the simple harmony explain a certain catchiness, the text about putting it on today is also not overly complex, but Schlager also meet these criteria. Nonetheless, “Rock Around The Clock” just gets something going - something that men like Elvis Presley, Chuck Berry or Jerry Lee Lewis have turned into a real threat to the world of the established, namely the feeling that youth have every kind of experience , Skill and education beats.

And because that was a message that could be marketed, rock 'n' roll soon lacked the spontaneous and naive that initially set it apart. Too much of it bothers every kind of commerce: “I don't know anything about music. That's not necessary in my business, ”said Elvis Presley tersely. But by then he was already the fat king of the 70s, who had built a parallel universe in his mansion in Memphis, knocked out television with his Colt if he didn't like the program, and otherwise pumped himself full of medicine on stage in Las Vegas fondled by aging housewives.

Bill Haley hardly had a more gracious fate, despite his 70 million records sold. Soon his style was no longer considered modern, which temporarily forced him to fiddle around with clubs. Personally, he must have been a nice guy, that was not only confirmed by the “Star Club” manager Horst Fascher in a memoir.

The guarantee of success of the shed on St. Pauli, in which the Beatles had also made guest appearances before their breakthrough, Haley also attested that he was not averse to worldly pleasures. Band members who celebrated their birthday had to perform a sexual act after the gig with their colleagues, writes Fascher. Because it was not possible to organize a girl for the event in Hamburg in a hurry, a transvestite stopped by and really heated up the atmosphere.

He was the headlining poster from 1956
Source: picture alliance / Everett Colle

After several small comebacks, Bill Haley died on February 9, 1981 in Texas. He never rose to the Olympus of the Elvis Presleys, Beatles or Michael Jacksons of this world. But there is no mistaking it: When bands like The Rolling Stones or AC / DC sell out a stadium in the 21st century, it is not least due to Bill Haley. Even if the audience no longer consists to a large extent of young people, but of grandparents.

Re: German article about Bill Haley including usual rant against Elvis

Such pathetic cheap shots at Elvis. I like BIll Haley, have his records and respect his influence but this is not the way to honor him - including the tawdry and unclear allegations about his band. 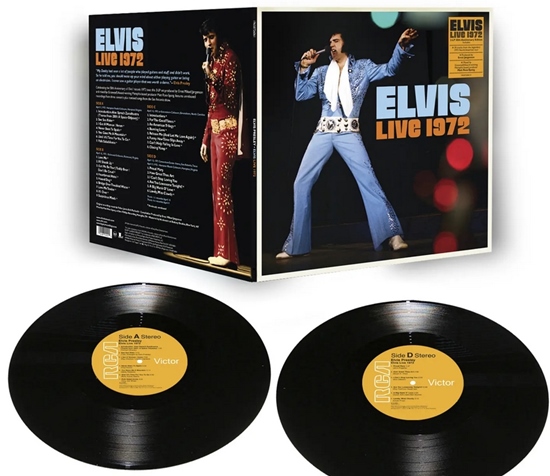 http://rewoundradio.com/
On the Edge of Reality

Return to “Elvis In The Media”