Anything about Elvis
More than 100 Million visitors can't be wrong

If he has anything at all, my money is on it being the Billy Fury recording. As has been mentioned, it sounds Elvis-like to the untrained ear.

Here's the disk, this and when it was recorded is on Keith Flynn's great site under Home Recordings. 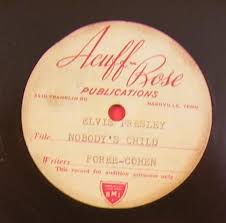 If you've never seen it, check out his appearance on the Tonight Show with Johnny Carson, at about the 5:50 mark:
..
All time classic!

Whether he's a fake or not I would like to hear "Nobody's Child." Maybe someone could contact Ernst to ask if the story about Uri owning it is real and does he know if it has been fixed and has he heard it?

If you stroll down there's a bit where you can contact Uri.He promises to answer every question.Although not long answers he did in fact do this and very quickly as well.

So come on let's all email him and try to get to the bottom of this.

Did he put the acetate together again simply with his mind?

If you've never seen it, check out his appearance on the Tonight Show with Johnny Carson, at about the 5:50 mark:
..
All time classic!

Thanks that was excellent as was the Peter Popoff clip - what a sh*t.

I`m a new writer here. I have to say that the mentioned gyu is a known charlatan. we should not take any of his word as anything but bull++++. And just to make sure: I Do love Elvis´s music, That`s why i`m here. Glad to know Y`all.

In pmd Ernst about the recording here's his reply,

That was an easy question. I have heard the recording - and it's definitely not Elvis - it doesn't even sound like him - more like an Elvis imitator,


Have a great day

jacob wrote:In pmd Ernst about the recording here's his reply,

That was an easy question. I have heard the recording - and it's definitely not Elvis - it doesn't even sound like him - more like an Elvis imitator,


Have a great day

Thank you, Jacob and Ernst. This confirmed my suspicions.

It's a shame though,I was hoping it was real.

So what's the story with the broken acetate then? Something doesn't add up here. If we assume that Geller never had the acetate in the first place, what is the recording that he possesses? How did Ernst get to hear it?

You've got one scenario which says that Geller invented the story about owning the disc. It never got broken because it didn't exist - I know that there is a genuine broken acetate out there, but Geller never bought it - and so the bit about him getting it repaired is also a non-starter. In that case, what was it that Ernst heard? Why did he even ask to listen to something which he must have known didn't exist in the first place? And then Geller has to find somebody to record a version of the song for him, which then had to be made to sound like it had come from an old acetate? Phew, that's a mess from start to finish.

The other scenario is that there was an acetate of somebody singing Nobody's Child, which Geller bought in good faith, but which arrived broken. He then paid for somebody to restore it, and he believes that it's Elvis. But what are the chances of there being a second acetate, with an identical label, albeit a forgery? Anyone trying to pull off that scam would know that the second it was played the truth would be out. It would be easier just to make a disc with blank grooves.

You can see a (small) picture of the broken disc here:

This is the picture

Uri said it was bought off Ebay and it came from the estate of Mary Jarvis,Felton's wife so I assume he thought it was genuine.Wasn't it supposed to be hanging on the wall of Felton's office for years?
Uri may have said it was Elvis because he felt foolish for being conned,who knows?
Ernst has said he's heard it and it's not Elvis,that's good enough for me.I thought it was a bit funny when Uri said he bought the disc from eBay and it came from Mrs.Jarvis.I read before that Ernst new Felton,so I would have thought he would have been in contact with someone in the family way before this to see if Felton had any recordings.And if this disc was hanging on his office wall I would have thought this would have been the first thing that would have been brought to his attention.

I don't for one minute believe that Uri Geller possesses an unreleased - playable - recording of Elvis singing Nobody's Child. But it still doesn't all add up.

I can't believe 2 pages of bandwidth was wasted on this fake @ss lying piece of sh*t Uri Geller.

If It wasn't for where it supposedly came from(Felton) I would have probably felt the same but Ernst has made previous comments about the acetate(Being damaged in transportation) so I was curious.We all know from the recent discovery of IFTRTF that there is always a possibility of unreleased songs being un earthed
Perhaps we should all email Uri and ask him what he playing at

Rock Legend
Suspended for one week

Someone here mentioned a link between this acetate and Felton Jarvis. I cannot comment on that, but it’s worth pointing out that Felton in the early 60s made some recordings with an Elvis-soundalike who called himself ‘Vince Everett’ (real name Marvin Benefield). You can probably find some of these recordings, like ‘Such A Night’, on YouTube. So it’s not unlikely that it’s Benefield singing on the acetate if indeed such a link exists.

This was part of the original article,

The disc had come from the estate of Mary Jarvis in Nashville.
Mary’s late husband Felton was, for many years, Elvis’s producer at RCA records. The disc had hung on his office wall in Nashville.

As you said Rock Legend,there was the Vince Everett connection,Felton even gave him the name so you may be right.The thing I can't understand is why it had the name Elvis on the disc and why was it hanging on his wall?

I don't think it's a good song anyway. I kinda like it personally but, let's be honest: it's nothing more than a feigned tearjearker, that simply wouldn't have suited Elvis.

Return to “All Elvis”