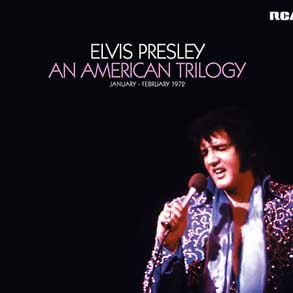 The story begins one night in the late '60s, Mickey Newbury was appearing at the Bitter End West in Los Angeles, and he began discussing such matters backstage with comedian David Steinberg. It was a time of frequent newspaper headlines about whites in newly integrated Southern schools insisting on Dixie as the school fight song, and blacks protesting because to them it was an anthem of white supremacy.

Newbury was annoyed because he saw nothing in the song itself that should make it the exclusive property of one-time segregationists, and on a whim he announced that he would sing it that night just to prove a point. The Bitter End's manager, Paul Colby, was alarmed at the prospect — at first laughing nervously on the off-chance that Newbury was joking. But when he realized that the star of the evening was absolutely serious, he began explaining with rapid-fire urgency that Dixie was not exactly the type of song that a bunch of radicalized young Californians had turned out to hear. 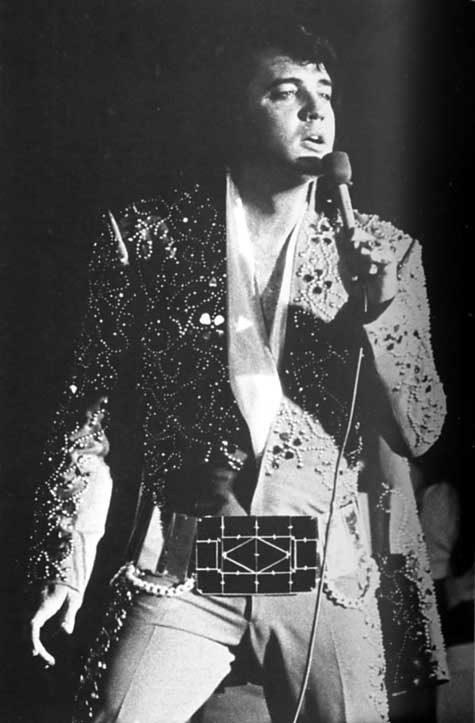 No matter. Newbury was undeterred, and when he got onstage he ran through part of his normal set, and then with a gentle strum of his guitar, he began to sing the words, ''Oh I wish I was in the land of cotton.'' But instead of belting them out in the rebel-yell style that everybody was accustomed to, he plucked the notes slowly on his old guitar, and his voice took on a rich, haunting quality that called up a different set of images — visions not of a mean-spirited South, but of a poignant South, a land caught in the grips of tragedy and suffering for 150 years.

There was power in the transformation, and it grew even stronger as Newbury shifted in midnote to The Battle Hymn of the Republic, and then to an antebellum gospel song called All My Trials. Before the impromptu trilogy was completed, it had become one of the most supercharged events in the history of the Bitter End West. Every other sound in the room had vanished in the emotion of the moment. Odetta, the famous black folk singer, was sitting in the front row with tears in her eyes, and Newbury knew that he had accomplished his purpose and a great deal more. The lyric Mickey incorporated into the classic arrangement was:"His truth is marching on".Mickey Newbury died in 2002 after a long Illness, but had known Felton Jarvis from way back…..and had his first Album produced by him back in 1968. Perhaps Newbury's best-known work is one he didn't write — 'An American Trilogy'. Newbury arranged Trilogy by pulling together Civil War-era songs Battle Hymn of the Republic, Dixie and All My Trials. Elvis Presley then popularized Trilogy, making it a staple of his 1970s performances.

So hush little baby
Don't you cry
You know your daddy's bound to die
But all my trials, Lord will soon be over 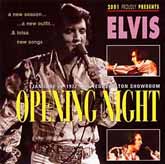 Las Vegas 26.1.72 O/S Very lengthy version running for nearly 4 minute and 38 seconds. Elvis sings VERY softly at the start-almost whispering…also he sings WITH The Stamps too.” For Dixieland that’s where I was born” however Elvis’s voice gradually gets stronger throughout the song (VERY quiet around the Flute Solo) until by the end of the song Elvis is sounding MUCH stronger/louder. J.D. Sumners Bass lines finishes the song. Most interesting first ‘live’ version and clearly soon after woods in this 1st week he gets the Stamps to sing their own part by saying “Sing it Fellas”. Opening Night ' 72 (Label 2001-03) (Released 1997)

Las Vegas 6.2.72 M/S Elvis doesn’t say ‘sing it fellas’, but sings part of the chorus with the stamps. It’s slowly sung and builds to a great version.

Las Vegas 16.2.72 D/S Elvis mentions a few comments and this version isn’t quite as good, however all-held and good ending.

Las Vegas 16.2.72 M/S This is the single released ‘Master’ version (live in Las Vegas/Burning Love-expanded) running for a shorter 4:15 still a good version!

Las Vegas 21.2.72 D/S well received by the audience, All- held, nothing held back at the end of the song a very powerful excellent ending.

Las Vegas 22.2.72 D/S Elvis looses the words a bit at the beginning (Disneyland version) and apart from the great ending not up to the usual high standard.

Las Vegas 22.2.72 M/S A concert highlight with great drumming and no gimmick version.

Las Vegas 23.2.72 D/S ‘Sing it Fellas’ and drums and Elvis build up well towards the end. Ok version.

Rehearsals 31.3.72 Elvis was rehearsing prior to his forthcoming tour(and despite some mis-dated CD releases saying this was recorded on 5.4.72) a rehearsal can be heard on Lost on Tour –The Sequel, released on Bilko  in 1989-This release is still sold on eBay and it still a good release for it’s content. As Elvis comes to his An American Trilogy rehearsal he jokes singing ‘I wish I was somewhere else’. He also sings part of the Stamps piece also. All is Held and funnily Elvis gets Charlie Hodge to whistle the flute solo! (Elvis adds here that he’s looking for a net to catch him!) after a pause we get the ending missing the ‘you know your daddy’s bound to die’ bit and Elvis ends it reasonably for a very loose and lazy rehearsal. Afterwards Elvis himself even admits that he missed part of the last part out because he’s lazy and moves onto the next song to rehearse. 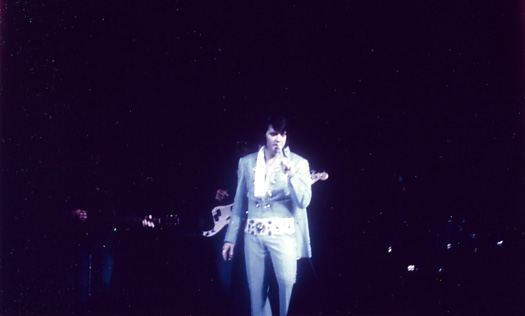 Buffalo, NY April 5th E/S unusually sung just before the band intros much regimented drum beat and Al- held. Their is just a tremendous build up at the end and Elvis too- Very good version.

Detroit,MI April 6th E/S This has a nice flute solo and a good ending-ok version.

Dayton,OH April 7th E/S This is well sung and builds well till the end where Elvis squeezes out that last drop of effort at the end- good version.
Hampton Roads, VA April 9th A/S Sung after the intros and here Elvis says Dixieland twice, gives a good ending but not best version this tour.

Hampton Roads, VA April 9th E/S  Sung straight and sincere but Elvis changes lines to:-“For Dixieland that’s where I was born” also it’s not the best ever Flute solo and a terrible loud Horn blowing just before the start of the last verse. Even during this version Elvis says ‘Thank-You Baby’ distracted by someone off stage-despite all of this it’s a good version. For ‘This is Elvis’ release in 1981 this was overdubbed in 1980. LIVE IN VIRGINIA (Vicky 0214) (Released 1990) Unfortunately visually you cannot see too much, certainly the stage is dark, nothing to be seen at all and it’s a pity the footage doesn’t show more.

Richmond, VA April 10th E/S * Elvis sings a bit of the Stamps, line, a good version with great horns and All-held. Best flute solo and an excellent build up at the end very sincere good version and (in my opinion) better than the ‘over-rated’ Hampton Roads version. CARRY ME BACK TO OLD VIRGINIA (Vicky 0217) (Released 1995)

Roanoke,VA April 11th E/S All- is held and another great version well appreciated by the fans. 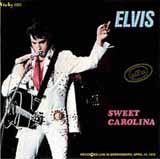 Greensboro, NC April 14th E/S * The drum beat carefully builds up to an excellent end, maybe best ‘on tour’ version? SWEET CAROLINA (Vicky 0215) (Released 1991) The footage here seems a bit better lit, but once again just simple stage lighting NO Flag shown or anything like it. The Greensboro Footage is amazing to see though, with the Brass, The Drums, and the whole build up is phenomenal!, the Flute solo-everything is seen Elvis has his cape attached at the start of the song and at the end he does his full cape spread!
Jacksonville,FL April 16th E/S here he doesn’t say ‘Sing it Fellas’, All – held and a very good version with Zero mucking around.
Little Rock, AR April 17th E/S ‘Disneyland’ version. All-held but tape runs out during the flute solo. Not the best version.
San Antonio, TX April 18th E/S Elvis sings: - “Look away Disneyland- pity because a great ending from Elvis is superb, but ruined by his ‘Joke’. running time 4:43 and on Close up box set disc 4
Albuquerque,NM April 19th E/S Straight sung version, obviously another very good version and well appreciated by the crowd.
New York,NY June 9th E/S this is a straight forward version ok, but NOT outstanding.
New York, NY June 10th A/S good version running time 4:41
New York, NY June 10th E/S * says:”Trilogy” Shouts “What?” and “Sing it Fellas, you’re on your own”. Just passable but one of the poorest versions this tour.r/t 4:33
New York,NY June 11th A/S  Sincere and excellent drumming. Good audience reaction and a very good version by Elvis.
Fort Wayne, IN June 12th E/S  Very good, Elvis shouts before last Chorus and a very committed and serious version-Excellent.
Evansville, IN June 13th E/S Strong Audience response her for a great version with a strong ending.
Milwaukee,WI June 14th E/S Introduced as his latest record….All held again, steadily and sincerely sung another great version.
Milwaukee,WI June 15th E/S Great audience reaction, great drumming this version All- held. Plus the extra effort at the ending VERY strong from Elvis an excellent version.
Chicago,IL June 16th E/S  ‘unavailable’.
Chicago,IL June 17th A/S A very measured version sung with great care, Great build up of drums and All- held an emotional and excellent version Again.
Fort Worth, TX June 18th E/S* Very carefully sung, Extends the word All… NOT rushed great drumming which carefully builds up to a climax to an outstanding version during which you can hear a pin drop.
Wichita,KS June 19th E/S Elvis holds the word All….. A definite ‘good’ 4 minute version.

Elvis mentions one time during his last (Winter) Vegas engagement where a Cowboy complete with hat was sitting at one of the front row tables and throughout the whole show didn’t move, just sat their. Then Elvis noticed when he was singing ‘An American Trilogy’ and going into the ‘Dixie’ bit the Cowboy removed his hat and put it over his heart! 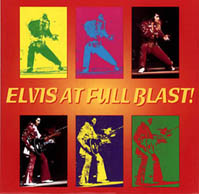 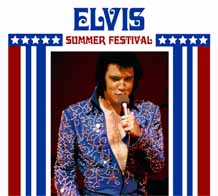 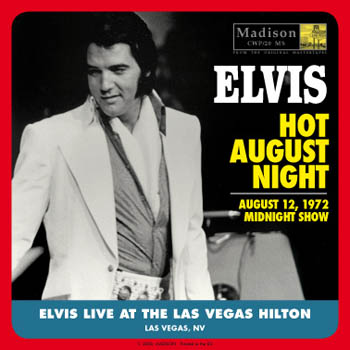 Las Vegas August 13th D/S A girl screams very early on during Elvis’s performance forcing him to say ‘you ruined the whole mood!’, however he does his best to deliver a decent performance and succeeds All-held, and another fine version.
Las Vegas August 16th D/S Elvis says ‘sing it old bridge’ and ‘Hush (it ain’t over yet baby), ‘In Dixieland where they were born, look away Disneyland.’ Elvis is cracking up at the start of this version and despite a good ending it’s a ‘throwaway’ version. TOP ACTS IN VEGAS VOL. 3 (Stage Ent. EP 5012) (Released 1995)