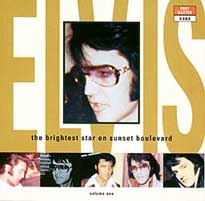 That's all right
I got a woman
The wonder of you
I've lost you
The next step is love
Stranger in the crowd
You've lost that lovin' feeling
Something
Don't cry daddy
Don't cry daddy (reprise)
You don't have to say you love me
Polk salad annie
Bridge over troubled water
I can't stop loving you
Just pretend
(Rehearsals, RCA Studios, Hollywood, CA, July 24, 1970)